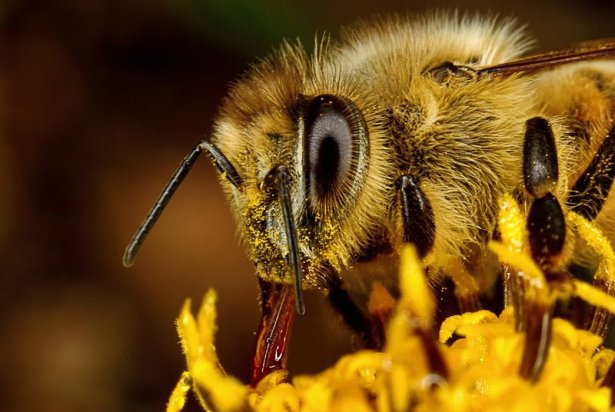 That was a pun. This is a post about bees.

So I’ve got this fascination with bees. Not up-close, because I’m afraid they’ll sting me and I’ll die. I got stung fairly regularly as a wee one (as one would expect growing up in the country in Minnesota) but also more than you’d think as both a teenager and young adult (no real satisfactory explanation for this). Three I remember vividly. Stepped on a nest while mowing the lawn, which wouldn’t have been that big a deal but I’d accidentally just run it over and was mowing barefoot at the time. They were pissed, and I rightly got hit about half a dozen times. Then once when I was older in the face, which was as initially terrifying as you’d expect but faded pretty quickly, and then finally once in the arm which (because of the latter) I figured would be no big deal until it swelled up so much I couldn’t bend my wrist for most of a day. So I keep my distance these days, and admire them from afar.

Bees are infinitely interesting. They’ve been around for millions of years, and navigated potentially cladogenetic environmental changes time and again by positively selecting advantageous traits very rapidly. Darwin was fascinated by them. They confounded human ingenuity for hundreds of years. I wrote about how they can help us be smarter in designing elections a while back. I guess, to me, they represent some ultimate form of crowdsourcing the decision-making apparatus, and serve in so many cases of the power of collective intelligence. 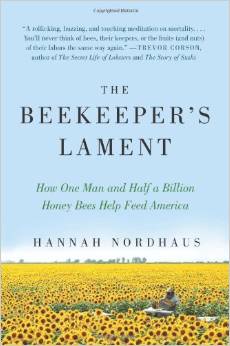 So recently, I picked up Hannah Nordhaus’ The Beekeeper’s Lament: How One Man and Half a Billion Honey Bees Help Feed the World. To be completely honest, I wasn’t expecting that much from it. Some overly dramatic language on how global warming/pesticide use/habitat loss has and continues to decimate bee populations and that’s going to lead to the end of life as we know it. Recent years have seen staggering bee losses in the United States, as any non-sequestered individual knows, and I assumed that would be the tent pole of the book. As a reader, such treatments bore me to tears. As an animal lover, I wasn’t really looking forward to a couple hundred pages about here’s another way I need to be ashamed of my species. As an historian of science and (in some ways) strict Darwinian, I knew it would probably be overwrought. Nature, for good and ill, finds a way. Species adapt, or they don’t, and the world keeps on turning. If humanity accidentally nukes itself a thousand times over, one or a hundred or a thousand million years from now life will emerge and start again.

Thankfully, refreshingly, astonishingly, even, Nordhaus manages to eschew that caricatured narrative which so plagues other science and nature writing (even by people who should know better). Certainly at times The Beekeeper’s Lament is a paean to a simpler time. Alternately, too, it might strike some occasionally as a hand holding a megaphone prophesying a looming Armageddon. Here and there, heartbreakingly, it is unavoidably Sinclairean in its portrayal of the honey-producing industry and the life of the average bee in America. It is, in fact, more than most a many-faceted narrative of hardship, loss, hope, triumph, tranquility, anxiety, sacrifice, community, loneliness, and stubbornness. It is, in other words, a narrative of the American beekeeper.

If that kind of exploration interests you, and you have an appreciation for consistently clear writing marked by a strong authorial voice, you’ll love The Beekeeper’s Lament. Nordhaus demonstrates a talent for making her characters come to life, which is quite the feat given how boring we know most of our fellow humans to be. John Miller, a beekeeper from California who also spends time in the northern plains, is the simultaneously irascible, gregarious, obsessive, laissez-faire, and above all committed central thread of the narrative. This is a book that, as I’m sure Nordhaus would admit, is as much his as it is hers. And he is, if not always likable, certainly insightful and interesting.

It’s a book filled with the minutiae (and history) of beekeeping, bee physiology, bee habitats and ecosystems, and the honey marketplace. The two most compelling points of the narrative are at once simple and revealing of the past, current, and future prospects for bees and all of the constituent ways in which their lives intersect our own.

The first is that the beekeeper hangs on by a thread. Varroa mites and pesticides contributing to colony collapse disorder (CCD), trade pressures (and laundered honey from China), disappearing habitats, the monoculture pursued by farmers, and labor shortages—in addition to what is at times an astonishing dearth of knowledge about the basic needs and lives of bees on the part of zoologists and biologists—all ensure that the beekeeper, more than most, lives a precarious existence. Beekeeping is an occupation, a way of life, really, that requires one to expect just as many bad years as good years. Pollination (of almonds, oranges, etc.) would be a much more hassle-free, lucrative way to put their bees to work. One doesn’t go into the bee business to make money, as the current demographic trends of the industry in the last two decades reflect. Beekeepers are getting older, and many are finding it difficult to find individuals to continue the work in the next generation.

The second is that for bees (both individuals and as a collective) life is an intensely focused affair that for all but a few will be almost certainly violently cut short. For some only recently understood (but many more often hidden) reasons, as a species their existence is a continual massacre. Nordhaus reiterates the common point that those who have in recent years followed the saga of the bee already know: that without the honey industry, the bee would virtually disappear from our daily lives. John Miller has about ten thousand hives holding around eighty thousand bees apiece, for a total population of three quarters of a billion bees. But in 2004 he lost thirty million bees when a truck transporting hives crashed. In 2008 he lost twenty five percent of his hives to CCD. Acceptable yearly loss before 2007 was fifteen percent, which is a lot when you consider there are some two trillion honey bees in the United States. Now, it’s thirty percent. Hundreds of millions of bees die every year, and will continue to do so. Oftentimes, honey bee outfits only survive because Miller and others raise queens and ship them around the country especially for repopulation after a colony collapse (in fact, it’s become an industry in its own right). This remains one of the most powerful lessons of the book, and speaks not only to the stubborn resilience of the American beekeeper but to the horror of an industry which views millions of deaths as part of a cycle that constitutes the new normal.

What would happen if we put the brakes on it all? Some conservationists would argue (usually the same ones that claim we need to keep eating beef or the cow would go extinct, so we’re really doing them a favor) that the honey bee would go the way of the dodo, the golden toad, the zanzibar leopard, or the javan tiger if we no longer acted as shepherd in the cruel, modern world. Varroa would prove their demise, or habitat loss would finish them off. Yet as Nordhaus also ably relates, bees remain, more than most, a resilient species. Some few variants would undoubtedly show adaptations which would allow them to survive and even flourish in an otherwise bee-less world. Whether we’d have honey for our consumables (or honey we’d want to use) or the two hundred billion dollars’ worth of crops bees pollinate each year remains a far less relevant story, evolutionarily speaking (except, of course, to the beekeeper). Or maybe there’s a third way, where we decide responsible cohabitation of the land with other species doesn’t automatically constitute endorsement of some anti-human narrative. Or that this is an either/or proposition. If that means I pay ten or twelve of fifteen bucks an ounce for honey, then I guess that’s what I’ll do.

And in spite of the endless cycles which seem to govern the life of the honey bee as a species, they are, as I’m sure Miller or any other beekeeper will tell you, unique and distinctive in their lives. Peel back the superficial, peer into the microcosmic, and you’ll find the moods, the whims, the predilections of the individual honey bee. And that, friends, is why Kundera serves as a better title for this post. That, and Nietschze has always seemed a gloomy bastard to me.