So the other day I was doing what all dissertating graduate students in the humanities (read = those of us staring unemployment in the face with little prospect of anything but a VAP for the first three years) do: sorting through an infinity of symposia posts and CFPs for conferences and book chapters, looking for anything that remotely matches what it is we do, so that we can yet again write some words for free in the hopes of adding yet one more line to the old curriculum vita. Someday I’d like to do a survey of graduate students and see if I can’t pin down the average cost/line of a humanities’ vita (in both time and money), though perhaps not because I’m pretty sure it would be horrifying.

But I digress. If nothing else, this process keeps us sharp: we get all sorts of practice re-thinking and re-framing what it is we do, or think we do, and that can help when some philosophy of ethics professor emeritus has nothing better to do but show up at one of your conference talks and asks how you think moral nihilism can inform your arguments about violence, or what R.M. Hare would say about the state legislating the body in the name of public healthcare for the greater good.

So I ran across a call for chapters in a new edited collection titled something like An Anthology of Genocide: Women. It used the following as a way to begin the discussion about genocide:

Our approach is a four point comparative framework derived from earlier Holocaust studies (Ofer and Weitzman 1998) that examines (1) the impact of culturally defined roles of women; (2) women’s “anticipatory reactions,” not just in the sense of what perpetrators would do to men, but to women as well. In examining anticipatory reactions, we explore women’s political and social awareness as the genocidal process unfolds; (3) the extent that women were treated differently than men; and (4) their reactions and processes as women to the physical and emotional circumstances of experiencing genocide.

Eugenics hits on every one of these points. In fact, the more I thought about it, the more ridiculous it seemed that I hadn’t written anything about it. After all, even though they came from very different intellectual places, Nazi eugenics (definitely a genocide) and American eugenics didn’t look all that different to the people getting sterilized (which the Nazis started with before moving on to murder). The Nazis targeted Jews and gypsies and homosexuals, and American eugenicists targeted the “feebleminded,” African Americans and American Indians, the indigent, and the insane.

So I wrote a proposal for a chapter, and I sent it in, and it’s been stuck a little in my mind ever since. Of course American eugenics was a genocide, but I’ve rarely seen that particular word used to describe it except in the really bad (for other reasons), polemical histories of eugenics (like War against the Weak, and Better for all the World). In fact, I think historians of American eugenics have been, to a certain degree, counter-programmed to avoid that connection. As if it were somehow incapable of being framed that way, as if it will obscure the narrative in some way, because no centralized state apparatus directed its activities under a specific ideology or schema. Which is, to my thinking, a limiting act. Taking “genocide” off the table eschews ways of interacting with the data and the narratives in an unhelpful way.

Because in fact, not all genocides are the same. Not all genocides make international headlines, spawn sprawling legal tribunals, or shape the popular consciousness of subsequent generations (how many of your friends who didn’t go to graduate school in the humanities have heard of eugenics?). In fact sometimes genocide, or something very much like it, can hide in plain sight, adumbrated, tentative outlines the only evidence it ever existed. American eugenics remains the perfect example of this type of genocide. From 1907-1960, more than sixty-three thousand individuals were forcibly sterilized in mental facilities, reform schools, prisons, and health clinics in the United States.

American eugenics remains a potent example of genocide because those official sixty-three thousand sterilized were accompanied by thousands, and ultimately unknowably more, for whom records were purposefully obscured, lost, or altered. American eugenics serves as an example of genocide not for stealing the lives of the current generation, but for terminating a priori the lives of the next. The creation of ontological markers of hereditary worth, the complicity of scientific apparatuses and epistemologies, the cooperation and collaboration of neighbors, professionals, and even the victims themselves—all of these activities and processes mark the discourse and praxis of American eugenics. 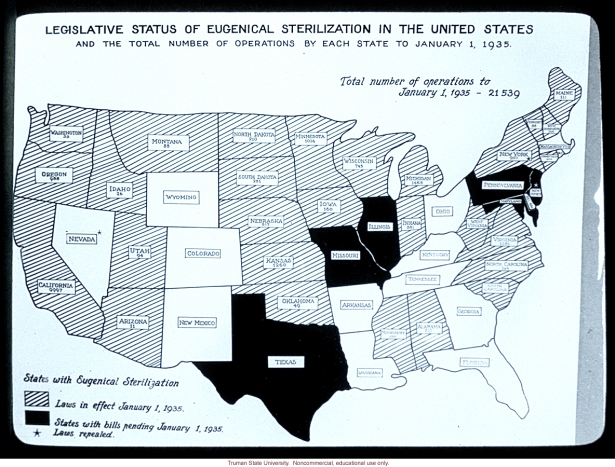 I think that we need to push the operative boundaries of genocide theory in order to return vocality to the individuals persecuted by the apparatuses of the American state. Letters from victims, newspaper coverage, and institutional correspondence; these are the doors and windows into American eugenics, and it remains one of the most compelling narratives of biopower and genocide in the twentieth century. Rebecca M. Kluchin has written about the difficulty in histories of eugenics in “locating the voices of the sterilized.”[1] Recovering those voices reveals that men women underwent radical transformations in self-identity as fathers and husbands, wives and mothers, and citizens. Their reactions to being forcibly sterilized were manifold, in accordance with the experiences they underwent not only in the physical (before, on the operating table, and after) but emotional realms as well. Sometimes they understood what was being done to them, and why, but most of the time they did not.

The history of American eugenics has been elided, which is a grave disservice to its people, despite and perhaps especially because of its connection with that most famous example of genocide under the Third Reich, and its own resemblance to other genocides throughout history. So let’s see what happens when we talk about it in that way. A little more American humility, and a little less smugness, would do us all good. 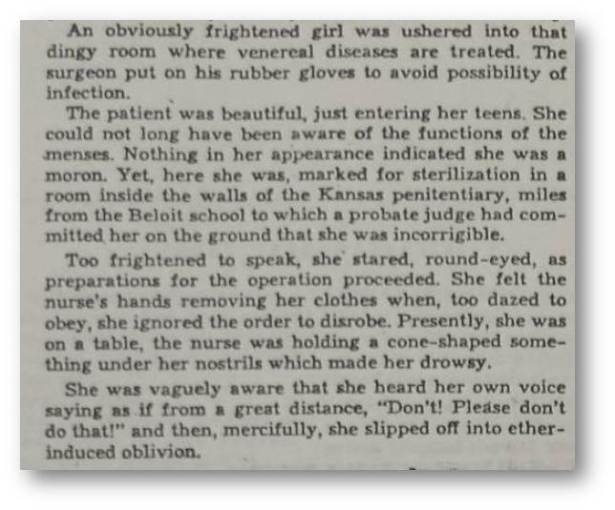