Numbers are seductive to us all, alluring, like the aroma of a fine (organically grown and fairly traded) coffee. They whisper promises of clarity in our ears. Easy solutions to complex problems are likewise appealing and easily sold to a public who, while its individual members are capable of critical thinking and sacrifice, collectively believe any burden at all in the name of the greater good is a burden too much. And new methodological tools and frameworks are like powdered alcohol to academics (especially those looking to professionalize and legitimize a new discipline)—easily transported, flexible, and everyone wants to be a dealer and corner the market.

Add these individual ingredients together in a world all of a sudden uncomfortably crowded, shrinking, apparently degenerate, and confusingly modern, and you get a monumentally potent tool that would, eventually, usher in American eugenics: the family study.

The eugenic family study has its roots in a genealogical report done by Richard Dugdale in The Jukes: A Study in Crime, Pauperism, Disease and Heredity (1877), which I won’t regurgitate at length here because Wikipedia exists. In any case, what it was is far less important than what it suggested for future generations of social scientists—that one’s familial line was an accurate predictor of intelligence, success, indigence, and criminality. The more palatable offshoot of this brand of progressivism was, of course, the “fitter family” contests of the first quarter of the twentieth century. 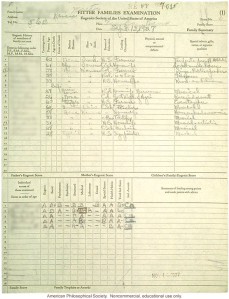 These family studies of the late nineteenth and early twentieth centuries located specific familial clans (like the pseudonymously named Jukes or the Kallikaks or the Nams or the Zeros) and attempted to trace their lineage and prove that imbeciles and criminals reproduced in proportionally greater numbers more imbeciles and criminals. Funded by organizations like the Eugenics Records Office at Cold Spring Harbor, and either submitted to state review boards or, in a couple of cases, published by philanthropists and eugenicists like John D. Rockefeller, these eugenic family studies were powerful artifacts of a cultural ethos. They were birthed by those taking part in a countermovement to public welfare reform in the United States, the latter of which itself had been stimulated by a public worried by the excesses of unregulated capitalism in what Twain called the “Gilded Age.”

Coetaneously, the eugenic family studies were a driving force in their own right. Proliferating between 1890 and 1924, they were read, cited, and built upon by prominent eugenicists in their efforts to maximize reproduction of the fit and reduce procreation of those deemed “feebleminded.” As such they were part of a much larger ideological and political stance, which in no small part stressed the burden on the state of families of these “degenerates.” They were no less than scientifically-sanctioned statements of bloodline worth, ontologies of heredity which would have much wider implications in decades to come. 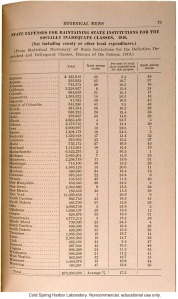 But they were also something more, and served yet another purpose that heavily influenced their methodology, content, and scope. Because the investigators who undertook these projects—going into the countryside and seeking out the poor in rural areas and pestering them with questions about their immediate and extended families—were themselves preoccupied with privileging a merit-based hierarchy where mental capacity was equated with genetic worth (in order so that they could advance their own careers and reputations), the studies subsequently came to reflect and validate the ambitions of middle-class professionals who emerged to fill this new niche of social control in a culturally tumultuous time. 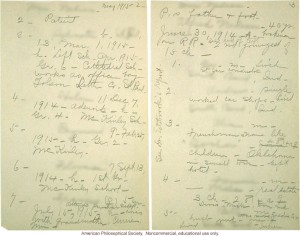 How popular did they become? Nathaniel Comfort offers a nice pithy summation for us:

“The ERO [Eugenics Records Office] introduced a novel and durable method of collecting human genetics data. Elaborating on [Francis] Galton’s idea of the eugenics ‘record,’ [Charles] Davenport developed a questionnaire of the type Galton used. But instead of marching people though his kiosk one by one, Davenport used mass-mailing, and, most effectively, ‘fieldworkers’ to collect data. The fieldworkers—more than 250 of them between 1910 and 1924—were mostly young women, many of them nursing students form the New York City area . . . [t]rainees spent a summer in Cold Spring Harbor, where their received twenty-five lectures encompassing interview methods, construction of pedigrees, and the elements of statistics and biometry. The young women then went out in the field for a year, where they catalogued and documented the hereditary patterns of the diseased and insane. The data were recorded three-by-five-inch cards and stored in a fireproof vault back at Cold Spring Harbor. By 1924, fieldworkers had filled out and filed 750,000 cards.”[1]

The result is that they helped grease the wheels for American eugenics with a potency long forgotten by high-school history textbooks, a movement which resulted in the sterilization of over 63,000 individuals between 1907 and 1964.

The general consensus is that the eugenic family studies died a justifiable death by the early 1920s, succumbing to advances in genetics which ate at the crumbling foundations of easy, simplistic biological determinism. And yet, polemics invested in the notion of races and classes of hereditary worth have been with us ever since.