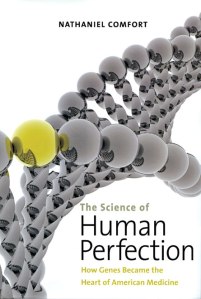 With for-profit companies offering genetic testing at prices approaching the commercially viable for the first time since the sequencing of the human genome ($1,000), eugenics as a topic of discussion in academic circles and in the popular news cycle alike will increase dramatically in frequency over the course of the next decade. In fact, it will likely be one of the conversational signposts of the twenty first century.  Designer babies, three-parent children, genomic medical therapeutics, and the stubborn persistence of racism and poor arguments disguised as science, like an eye booger clinging crustily on and just generally being a pain in the ass for everyone.

What was eugenics? For those unfamiliar, eugenics was a wildly popular scientific, cultural, social, and political movement in America (most popular) during the first half of the twentieth century. Spurred by advances in genetics after the rediscovery of Gregor Mendel’s famous work with pea plants in 1900, it developed simultaneously to medical genetics (i.e. using knowledge about genes to improve medical care). Both stretch all the way back to the beginning of the twentieth century (though most histories of medical genetics really begin in the 1950s).

So eugenics developed alongside humanity’s first stumbling investigations about what, how, and why traits get passed along from generation to generation. Eye color, physical build, demeanor, mental ability, susceptibility to disease—these are the types of qualities a new breed of scientists called geneticists initially sought out in the base material responsible for the direction taken by human evolution. Naturally, many quickly (and early on) suggested that now that humanity had access to the “germ plasm” (as they called DNA, which wouldn’t be discovered until the 1920s) we could take a conscious hand in directing the future of human evolution.

What does this have to do with Nathaniel Comfort’s Science of Human Perfection? Everything! This book is an attempt by Comfort, an historian of genetics and medicine at Johns Hopkins University, to do two things: 1) recover the thread of “medical genetics” from the history of eugenics, and 2) Demonstrate how the larger eugenics movement, reviled in the popular mind as the twisted progeny of the Nazis unleashed upon Europe’s non-Aryan ethnicities, was in fact a far more complex phenomena that, at its heart, was about “human improvement and the relief of suffering” (x). Now “human improvement” sounds an awful lot like the superman programs of the Third Reich, but, as Comfort shows clearly, the larger aim of the movement saw “improvement” as eliminating disease, inherited disorders, as well as increased intelligence and a stronger constitution.

Comfort traces this thread of medical genetics as it gradually thickened from 1910-1930. He notes the abandonment of most geneticists of eugenics by the 1930s as two obstacles appeared: first, the complexity of designing reliable experiments that could account for the complicated milieu going on inside the “germ plasm” as it was affected by environment (this is the classic nature vs. nurture dichotomy), and second, the ethical boundaries to carrying out those experiments on human beings. Instead, scientists like Michael F. Guyer at places like the University of Wisconsin occupied themselves with mice, fruit flies, and corn.

During this process, Comfort introduces another welcome formulation of distinguishing the strands of eugenic thought: Galtonian vs. Garrodian. The former settles its gaze on the population, whilst the latter emphasizes the individual. This opens up a whole new framework for understanding American eugenics that moves beyond the positive-negative dichotomy and adds nuance without sacrificing the accomplishments of previous scholarship.

Comfort follows the narrative into the 1950s and the advent of heredity clinics (which we still have today in the form of marriage counseling as it pertains to heredity), and shows how geneticists, with the onset of the Cold War and worries about the effects of radiation on the human genome, and also now bolstered by a quarter century of advances in knowledge and technique, re-approached medical genetics in the 1950s. There, The Science of Human Perfection ends.

This is a monograph that is, importantly, thoroughly researched and convincingly argued. Despite seeing increasing popularity in the scholarship during the last twenty years or so, eugenics still remains something of the bastard stepchild of history of science in academia. To blame this trend solely on the uncomfortableness the subject tends to engender (being tied so closely with the (bio-)political) seems to come, at least in part, from a public that wishes to forget the United States ever had an active movement for forced sterilization  and a larger history of science community of scholars who have gone along with that. At the same time, this is something of a copout and a cliché all at once. American eugenics was not Nazi eugenics: in intellectual grounding, structure (both in terms of the individuals proponents and organization), praxis, or even mostly time. And the threads of American eugenics, as we can see in Comfort’s excellent treatment (and elsewhere), certainly didn’t die with Hitler in that underground bunker in April of 1945. Comfort, thankfully, elaborates with nuance and persuasiveness on both realities.

Even more welcome by those of us in the history of science who are too used to slogging through interminably boring prose, is that The Science of Human Perfection is incredibly well-written.Comfort has a wonderful way with words, and an ability to render primary sources into a compelling narrative. It is, aside from being one of the more important revisions of the historical literature on eugenics, one of the best-written studies in any sub-discipline of history I have had the pleasure of reading.

For anyone interested, Comfort runs the excellent Genotopia over at scienceblogs.