No, google. No I did not mean that.

I started this blog in March 2014, and it is almost unbelievable to me that it’s been a full year since its inception. Borne out of the desperate depths of a mind being slowly torn apart by the process of writing a dissertation in history, it served as a stopcock, a relief valve, and I’d be lying if I didn’t admit I half expected it to fade away into the pebble-strewn, rotting basement of the internet like so many others after a few weeks of no one noticing its existence or because I got bored or mad when people disagreed with me in public. I turned to it when I couldn’t imagine writing even one more word on the history of eugenics on the southern plains, cracking one more book or PDF open, shft+alt+f-ing one more footnote. I wondered, as too few of the rest of the internet seems to do, if I’d have anything useful or interesting to say about the topics and items that penetrate the fog inside of which we all walk around on a daily bases. And, as was inevitable, when there were days or weeks where this place took a distant backseat to other things going on in life, I wondered if it was dead to me.

In other words, I had very few expectations going into this. I wrote a dozen or so posts before going live so that, worst-case scenario, there’d be something here. But I remained unsure exactly who I intended my audience to be, and if they’d be interested anyway. Of course in many ways this place is a still a work in progress, both internally for me and externally as it appears to you. But I’ve settled into a comfortable rhythm here, and if it’s ok with you I think I’ll keep it around for the foreseeable future. Google seems to like it, enough people are dropping by on a daily basis, and I find I still enjoy putting down the words and the pictures. slowlorisblog has been visited a little more than five thousand times in the last year, which is plenty good enough for me. The essay with the highest number of views remains, unsurprisingly, Dark Ecology as the Higher Mysanthropy, by Steve Fuller. The pieces on the humanities getting their collective shit together, eschewing open-access for one’s dissertation, and letting evolution and math teach us how to vote remain other popular ones, along with a book review I wrote of Mark Fiege’s Republic of Nature. Strangely, this review garners consistent hits no matter the time of day or day of the week, I have no explanation for this, except that I got it up before others and now it remains sustained by the algorithmic teat of the google machine. So popular is it, in fact, that it remains the number one search result, even higher than the book’s own website, republicofnature.com.

You’re welcome Dr. Fiege. Maybe you remember this if I apply for a position at Colorado State?

In other you-probably-don’t-care-but-I-do news, slowlorisblog has seen some excitement. We got retweeted by that great obfuscatory compendium of thoughts that is Nein Quarterly, interacted with historians of note like Nathaniel Comfort and Jim Grossman, showed up at the Social Epistemology Review and Reply Collective, and pinged by the eminently well-informed Karen Kelsky over at theprofessorisin.

As I say, I started this blog almost coetaneous to the moment I put the dissertation into high gear. For the curious, I went from looking like this. 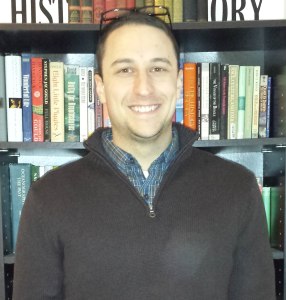 I added a twitter account which is followed by more than a handful of individuals I genuinely admire. As time permits I’ll be adding the audio files for conference talks I’ve given in the immediate past and going forward.

I also continue to believe that it’s absolutely vital for historians to engage the public and each other in places like this, and I’m convinced over the next decade a larger and larger percentage of new generations of historians will see such activities not as the kind of liminal, hipster space it is currently viewed as but a regular part of their daily praxis. So, onto 2015. I’ve got some scribblings in the pipeline on a myriad of subjects, including transhumanism, the hot-button issue in the profession right now that is The History Manifesto, and other assorted things that catch my fancy. So thanks for coming by today, and feel free always to drop me a line on twitter @slowlorisblog or via email at slowlorisblog[dot]gmail[dot]com.

One thought on “A New Year, a New Look”